We’re recommending conservation in the Seal River. Here’s why. 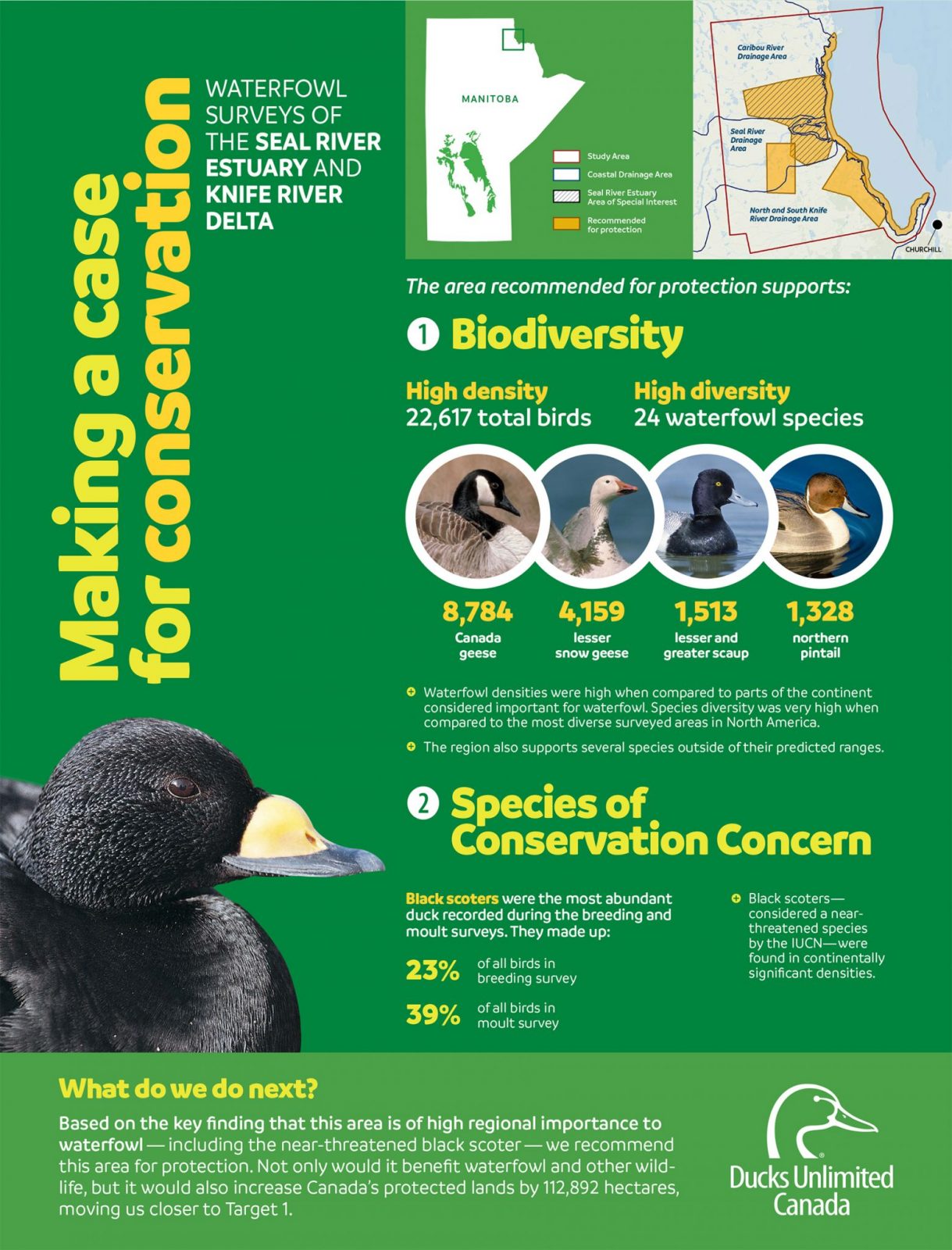 In 1990 the Government of Manitoba (GoM) committed to conserving the suite of ecosystems and biodiversity found within the province. They recognized key landscapes that represent the unique ecological characteristics of the province’s regions and sub-regions as Areas of Special Interest (ASI) to propose for future protection. The Seal River Estuary was identified as an ASI. To ensure the ASI’s proposed protected area boundary included the most valuable habitat for waterfowl and other water birds, Ducks Unlimited Canada (DUC) conducted aerial surveys of the Seal River Estuary ASI and surrounding areas.

Canada’s Target 1 is a commitment to the United Nations Convention on Biodiversity to protect 17 per cent of Canada’s land and freshwater by 2020. Approximately 11 per cent of Manitoba is currently protected. The Seal River ASI is roughly 56,000 hectares. The ASI and surrounding areas represent an excellent opportunity for the GoM to expand its network of protected areas. Aerial view of the Seal River Estuary. Image courtesy of the Government of Manitoba – Frank Baldwin.

Why is this research important? What did we do?

Biologists with the GoM reported that in addition to the Seal River ASI, adjacent areas such as the Knife River Delta, hold a large number of wetlands that support an abundance of waterfowl, shorebirds, and other animals. From 2013 to 2015, in partnership with Ocean’s North, DUC conducted waterfowl surveys in the Seal River ASI and adjacent areas to build on the GoM’s surveys and gain a better understanding of the abundance and diversity of waterfowl in the region. DUC collected data by performing aerial surveys of breeding waterfowl across approximately 77,000 square kilometres of boreal, tundra, and coastal landscapes of northern Manitoba. In 2015, DUC also conducted moult and fall migration surveys between Churchill and the Manitoba-Nunavut border.

What did we find?

Densities of waterfowl were high and comparable to regions of the continent considered important for waterfowl. The study also found that the area supported a very high diversity of species, comparable to the most diverse surveyed areas on the continent. Furthermore, the region supports several species outside of their predicted range and continentally-significant densities of black scoters, a species considered near-threatened by the IUCN. Significant numbers of scaup and northern pintail were also recorded, which is noteworthy because these populations have experienced considerable declines.

Most notably, DUC determined that the areas of highest regional importance to waterfowl were in the Knife River Delta and the inland portion of the Seal River, which are outside the current ASI proposed protected area boundary. As well, the coastal waters that encompass the Seal, Knife, and Caribou River estuaries were identified as being relatively important for moulting and migrating waterfowl. What does this mean?

The findings mean the Seal River Estuary ASI, and some areas outside of the current proposed protected area boundary, are comprised of highly-important waterfowl breeding, moulting, and migratory habitat. The results support the contention that the value of a protected area in this region is important to waterfowl from both a Manitoba and continental perspective.

What do we do next?

Based on the key finding that the areas of highest regional importance to waterfowl, including the near-threatened black scoter, were found to be included in the Knife River Delta, the inland portion of the Seal River, and the nearby coastal waters, DUC recommends that any proposed protected area boundary of the Seal River Watershed be expanded to include these additional areas.

Not only would it benefit waterfowl and other wildlife, but protection of the entire recommended area would increase Canada’s protected lands by 112,892 hectares – moving us closer to Target 1.

An initiative to protect the Seal River watershed as an Indigenous Protected Area is currently underway. For more information visit www.SealRiverWatershed.ca